Recently I’ve been thinking about adapting common party games for the classroom. The energy and quick thinking involved in games like Charades, Celebrity, Pictionary, and Taboo would work well to help students internalize facts such as historical names and events. “Who Am I” (title will change, don’t worry) is basically Charades using SMALLab to provide visual feedback and an architecture for team play. I made a very rough video of how it would work (do not judge my animation & video skills on this!):

In case you don’t feel like watching it, here’s an illustration and brief description: 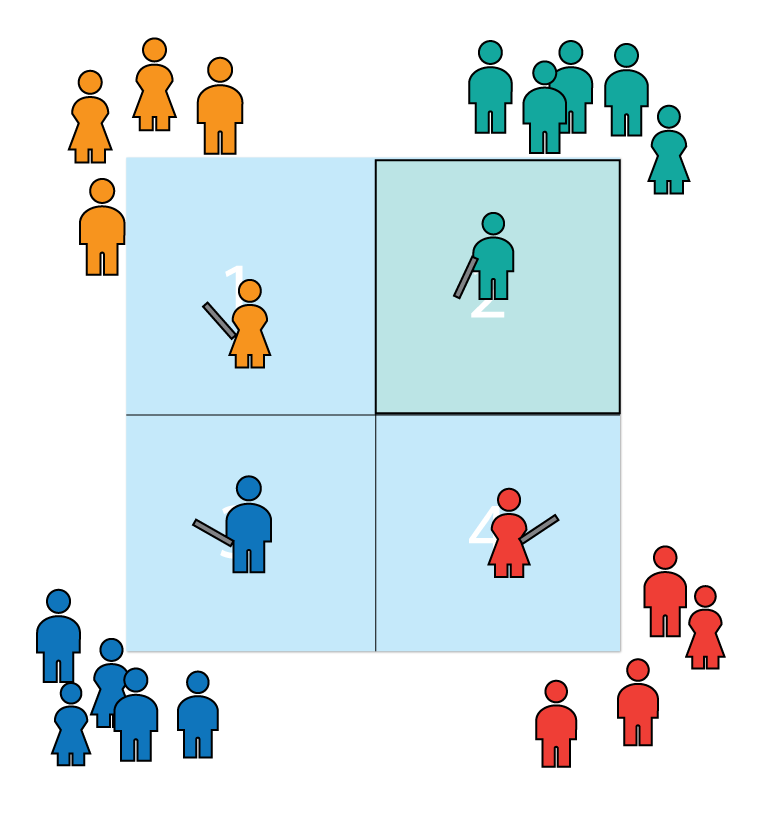 In the above image, students have been divided into 4 teams. One student from each team has been given a character to act out such as Ben Franklin, Abraham Lincoln, etc. That students stands in the center of each quadrant. When the game begins, the center student silently acts out their character while his/her teammates guess who they are.

Upon a correct guess, the student in the quadrant taps their wand to the floor which causes the quadrant to light up. That student switches places with the student who answered correctly. All of the teams shift clockwise, e.g. red would now be at blue. The active quadrant stops flashing (maybe it’s on a timer).

A new round begins: the student in the quadrant acts out their character and the others guess. Again, when someone guesses correctly the acting student taps the quadrant, changes places with the student who answered, and all teams shift clockwise to begin again.

The game ends when each team returns to its original quadrant. The team with the most answerers and successful “charaders” wins (not a terribly creative win condition, subject to change).

“Who Am I” is intended to reinforce topics covered in class rather than to teach new material. By presenting otherwise dry information in an active and social framework like SMALLab, and by giving students the freedom to interpret the material however they like, the hope is that they will better remember and connect to the material they learn in class.

The game can be adapted to work with any topic, and the content doesn’t need to be an historical person – students could act out an event, pretend to be in a specific location, or simply make movements that indicate a vocabulary word (as in the Movement as Metaphor exercise from the D-Lab). Later on I would like to add a timeline/chronology feature too.

After talking with friend and talented game designer Adam Nelson of City of Play, here are some additional ideas: