I want to start playing as many games as possible and doing brief-ish analyses of them, so here’s a start:

Overview
Temple run is a free (and ad free) 3D platform game. You are a man running from a herd of what appear to be gorillas and have to collect coins for bonuses along the way, all the while turning, leaping over, ducking under obstacles, and collecting coins. You can then spend your coins on powerups and new characters at a store and can, of course, buy more coins with real money if you don’t have enough. There is also a comprehensive list of objectives to work through as you play.

Narrative
When you open the game, there is the tagline “Take the Idol if you Dare” at the door of the temple. We can infer the man stole an idol and the gorillas, the protectors, are chasing him. Other than that, we don’t know who the man is, why he is there (other than to steal the idol), etc. It seems possible more narrative might develop as you get deeper into the game as the surroundings change and you purchase more perks with coins.

Controls
Using swipe gestures, you can turn (L or R), jump (Up), slide under (down), and move slightly left or right to collect coins (tilt).

1st Order Strategies
The first few turns of the map only have a jump or two. The temple area is pretty easy to navigate so you can quickly get to more interesting and challenging surrounding areas. You quickly achieve a few objectives and accumulate enough gold to purchase some basic perks from the store.

Achievments
There is a large list of objectives to browse from the game’s main menu. They are arbitrary and unavoidable achievements (which Extra Credits says is lazy design) and the list is entirely too long to mean anything. For example, the ‘1/4 Million club’ when you reach 250k gold. 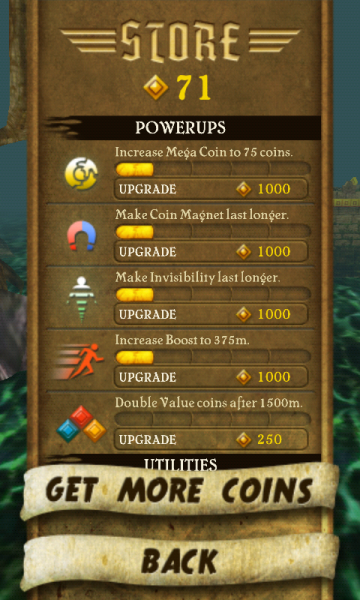 Break Points
I though the interaction of tilting with the other gesture movements was a little off. For example, if there are coins on the right of what you are trying to jump over it is difficult to swipe and tilt simultaneously. After playing for a bit, I figured out it’s much easier to use your thumbs – might have been a good idea to suggest this. I first started with the iPad on my lap and using my index finger to swipe.

As I explored further out of the main temple area, I became bored with the standard walls and it is annoying to have to run through them every time to get to new areas. I didn’t play that long so maybe you do start at new areas eventually (or you can pay to), but in the short time I played I wanted to start somewhere else.

Also the arbitrary nature of the game Objectives and Store items – I wasn’t sure how anything was really helping me. For example, you can purchase an invisibility power up which appears to make transparent bridges over top the craters and I assume you are invisible to the gorillas. The Store also includes new avatars and utilities. I don’t think the gameplay adapts enough when you purchase these items to make them apparently useful.

Bugs/Glitches
Didn’t notice any in the time I played. 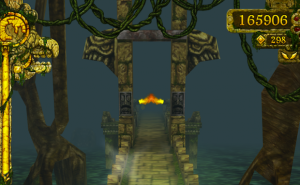 Technical Shortcuts
As I said above, the environment has very simple geometry and textures, but they are passable because you don’t see details when you are running around. The gorillas chasing you are obviously the same animation sequence looping at different intervals. Also taking advantage of the play speed, their geometry is very simple and rugged – their feet seem to be just triangles and are not very believable. The environment is also foggy which lessens the amount of graphics rendered at once. The character is never shown from the front. At the beginning, the camera rotates and shows him from the top then panning to a more behind view.

Graphics
The graphics are a little low quality and tacky looking. The 3D is effective, but the sharpness pales in comparison to what we are used to. The geometry and textures are very simple, and when seen up close cheapen the games appearance. Especially the gorillas.

Sound
Wasn’t playing on my iPad – not sure why, but I don’t think it was because of the game. And I don’t want to look into it now because I’m not going to publish this if I wait any longer.

Was it fun?
Well, it is one of those addicting iPad games for sure. Once you get the hang of the controls (using thumbs instead of index finger) it is very satisfying to move through the world and discover different types of bridges.